So it looks like I might have got the challenge bug!  I found a great little challenge on the Artful Times blog hosted by Neet and Von, and just had to join in.

Challenge 21 is all about creating an ATC based on Time... and so here is mine!

I started by using Alcohol Inks on glossy card and then used blending solution through a stencil to create a ghost clock image. I then stamped off the edges of the card using a Tim Holtz clock stamp and Ranger Archival Ink in Coffee and also inked the edges of the card.

I finished the ATC with a printed and inked phrase and added Tim Holtz metal clock hands to the ghostly clock image.

Thanks for the challenge Neet and Von look forward to seeing what everyone creates!﻿
Posted by Art Journey at 02:47:00 21 comments:

Well I've never entered a challenge before, but under the peer pressure of my talented Creativity Venture Group friends, I have decided to enter this weeks PaperArtsy Blog Challenge.

The challenge was to use Portfolio Oil Pastels (or other watersoluble media / crayons), PaperArtsy Stamps and be inspired by the series of tags created by Helen Chilton.  It was great to see the different techniques used by Helen (and if you want to see some fabby tags inspired by these techniques visit my fellow CV member Sam21Ski's Blog for great examples of Wax Scraping and Blended Background Tags - just beautiful!)


So... onto my attempt... however I am rather challenged in the PaperArtsy stamp department as I have just four of their stamps that were purchased long, long ago when the world {and PaperArtsy} were young.

Not to be deterred, I made two backgrounds by blending the Portfolio Oil Pastels, using stamping and stenciling.  Following along with Helen's examples, I then stamped the PA Ink and The Dog Mini 'Man' stamp onto acetate and attached it to the background. I then tried to layer a second stamped image onto the background but noticed that I had the image reversed... but surprisingly liked the fact that layered images created a completely different looking man! 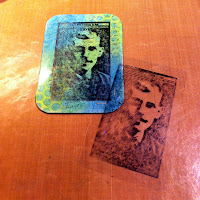 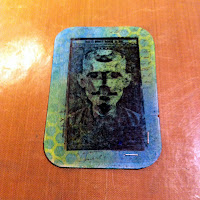 Anyway, its my first challenge entry... so go easy on me! And Good Luck to whoever else enters! 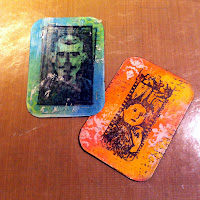 I guesss this is just like "the day after the night before"!

My lovely friend Sandy Jones has just been announced as one of the Design Team for Crafty Embellies and they have a weekly challenge to upload a picture of your desk or crafting space, exactly as it is for "Messy Monday"... so here's mine!

And as I spent almost all weekend getting arty & crafty (art journaling and completing my challenge for Creativity Venture) my desk today is truly a mess!

Well it gives me great pleasure to annouce the winners of the MAJOR prize(s) donated by the fabulous, anonymous, benefactor...

The lovely Jen (Ozegran) has made a YouTube video announcing the winners just here:-

On 31st December 2012, the lovely Ozegran kicked off the worldwide stream-a-thon and the New Year celebrations at 12:30 GMT (11:30pm Australian Time).  Jen made a fabulous planner and there is still time to make your own using the PDF provided on Jen's blog and by following along the recorded stream.

The PDF can be downloaded here:- Planner PDF
And Jen's recorded streams are here:-  Video1  and  Video2
After Jen had passed to baton on, the streams went around the world from Edinburgh, London, Somerset and Walsall in the UK, to the Czech Repulic and onto various locations in and Canada and America.  The full list of the streamers channels can be found here:  www.artjourney.co  and the ever efficent Jen has a full list of all the recorded streams on her blog here:-  Recorded Streams
My stream slot was the midnight hour in the UK where, amongst the mayhem, HRH made a speech and partied on down (edited highlights can be watched on this YouTube video), the chimes of Big Ben were played lived from the BBC... and we undertook a 2012 Quiz with a question (and prize!) for each month.
Here's the Quiz Questions, the answers and the name of the person who won the prize for that question.  (Winners:  If you haven't contacted me already, please email me your ustream name, real name and postal address, so I can send you your prize!)
Now all that is left is for the final MAJOR Prize draw to take place.  What MAJOR Prize draw I hear you ask?!?  Well, a fabulous (and anonymous) benefactor donated a fabulous prize of return flights, accomodation and attendance to Elegant Tangle's (Bren47's) Art Retreat in April 2012 in Austin, Texas!  TIMES TWO!  Yes thats two seperate places for two winners!  Amazing!
So anyone who came along to the streams and watched, or streamed or played along has been entered into the draw and the lucky winners will be annouced... tomorrow!  So watch this space!!
Posted by Art Journey at 08:44:00 No comments: 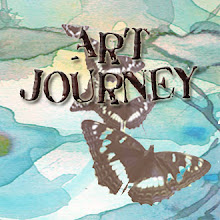